In one corner of the studio is the material area

Han Wenqiang adheres to the basic viewpoint of “space is the medium” and uses the method of “relationship design” to give shape to things and create environment for the heart, so as to maintain the harmonious balance between man, nature, history, commerce and space environment

The reconstructed building will be used for office and party

There are no doors, windows and walls in the hospital, and rough wood structure beams and columns are exposed

The picture is from photographer HQ

In the front is an open space, including two brick houses and an old tree; At the back is a U-shaped building with a glass roof covering the inner courtyard

It is not only a path channel, but also re divides the courtyard level, and brings the fun of viewing and walking.

Project “Qishe courtyard”: the “cornice” on the “corridor” is embedded in the original roof

While improving the construction quality and infrastructure, the transformation focuses on creating specific scene experience based on the Hutong environment, so as to attract urban people with increasingly diversified consumer demand

For example, his quadrangle reconstruction project “twisting courtyard”, the original four houses are built based on the ritual hierarchical concept and code of conduct in the traditional courtyard, which is an ethical expression in the traditional society

After completion, the designer decorated these materials indoors and outdoors as landscapes, steps and flower pots; The wooden beams discarded in the building restoration were transformed into seats“ “Veranda” has always been a basic element in Chinese traditional architecture

The original building is not the common slope roof building of quadrangles, but several separated brick concrete flat roof buildings

The building is like a hidden space hidden under the earth hill, extending in the original forest like a tree fork without disturbing the existence of the trunk

Trees, skylight, water covered with lotus, these natural elements work together with architecture to make people feel a sense of spiritual ritual

Compared with residential houses, the houses here are tall

The construction project covering an area of only 500 square meters reflects the design concept of the studio: material space not only meets functional attributes, but also needs spiritual connotation and experience value

Before this transformation, the house structure has been rebuilt as a whole

|  Dieyuaner “dieyuaner” is hidden in a traditional commercial block near Qianmen, Beijing, covering an area of about 500 square meters

There are a row of arched doors and windows along the street in the south, and two floors of houses in the north

After the completion of the project, “qulangyuan” has won a number of architectural and interior design awards at home and abroad

When the social structure changes, the user population also changes

” The design of the project “pianfeng Gallery” hopes to respect the spatial characteristics of old industrial buildings, improve the functional layout of contemporary art exhibition hall and improve the quality of internal space

| The folding yard covers an area of about 410 square meters

|  “Qiheyuan” project: the “cornice” on the “veranda” is embedded into the original roof

Most project teams will carefully prepare building models, and the model area displays past classic cases   Model, including obtaining ELLE   Decoration home gallery is the “seven homes in one courtyard” in the 2021 best residential project award of “China Interior Design Yearbook”

Architects introduce “veranda” as the most visible addition in the transformation of “seven houses in one courtyard”, connecting the originally separated seven houses into a whole

Click below to enter elledeco video number and walk with us   Han Wenqiang   Han Wenqiang, born in Dalian, Liaoning Province, holds a master’s degree from the school of architecture of the Central Academy of fine arts

There is such a sketch building in Tangshan, Hebei Province: the building is surrounded by riverside trees and wild vegetable fields

In different project scales, functional formats and constraints, his design attempts to respond to the same problem: how to make the architectural space have a closer relationship with people, rather than the grand scale urbanization trend“ Architecture should be based on natural climate, natural site and natural materials, naturally form design concepts, and interact with people’s body and emotional memory

When recalling the design process of Shuian Buddhist hall, Han Wenqiang said that the design inspiration came from the characteristics of the site, creating a path for people to walk under the woods, “let this path become a building”, “the surface covered with soil becomes an earth slope, and becomes a building hidden in the site.”   Entrance B  | As early as the graduate stage of the Central Academy of fine arts, Han Wenqiang has participated in large-scale urban architecture bidding, but many projects have not been finally implemented

In the project “Qishe courtyard”, the designer moderately adds new materials on the basis of maintaining the material characteristics of traditional buildings, and pays attention to maintaining the mark of time iteration, so that there are slight differences and superposition between the new and the old

The change of users makes the space equal and comfortable

People can walk in it or meditate

This is also in line with the concept of the project “Shuian Buddhist hall”: for people to meditate, meditate and meditate

According to architect Han Wenqiang, space is a medium

In the design, taking “relational design” as the starting point, coordinate and deal with the relationship between size, inside and outside, old and new, as well as man-made and nature, so as to enhance the spiritual connotation and experience value of material space

The site is divided into two parts

For example, in the Hutong reconstruction project, Han Wenqiang did not blindly follow the structure of the original building or create a “good-looking” space, but also combined the needs of the new era and dealing with the relationship between the new and the old, so as to form a “new building type” to achieve a breakthrough in significance

The old building structure is aging, the rooms are narrow and closed, and lack of infrastructure

Under the concept of “repairing the old and embedding the new”, it not only restores the texture relationship between the yard and the house, but also increases the comfort and spatial function necessary for contemporary life

With the continuous development and progress of social economy, architecture is more and more in pursuit of external beauty, which needs complex external wall decoration to reflect, and the deepening 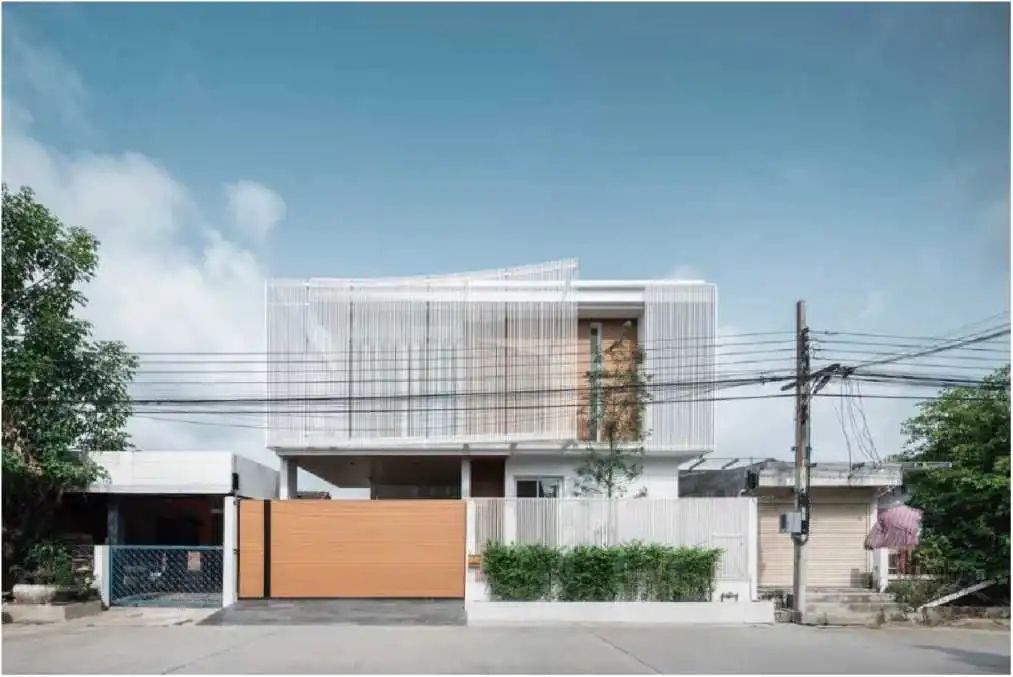 Click the blue words above to pay attention to the “IIIIII” Yuling building 2021-08-28 in our ~ building facade . Source: nothing but buildings . If there is any copyright