[memory] architecture can be read: after a hundred years, the small building on Fenyang road has a lingering charm and a fragrance of calligraphy

The lattice column type of the railing corresponds to the columns on the second and third floors, and the column head is decorated with wine cup-shaped ornaments

During the repair process, after the decorative layer in the blocked area is gently chiseled manually, if no original Aquarius railing is found, it shall be rebuilt and installed in equal proportion according to the original photos, original drawings or design drawings

South side of building   There is a parapet on the roof, and the central arc is a breast board

Pool corresponding to the main building (once and now)   The south facade is the main entrance, with large steps in front

In July 2016, the building is to be repaired for Shanghai Opera exhibition and exchange

At the same time, it continues the central axis of the building, restores the sense of sequence of the external space, and creates a garden landscape with Shanghai style cultural characteristics

During the restoration project, the design team consulted a large number of historical archives, compared with historical pictures, implemented detailed repair schemes one by one for the places that were inconsistent with the original building structure formed in the process of building use over the years, took samples on the spot, referred to the archives and documents, and then implemented them on the construction drawing paper, so as to completely restore the original appearance of the building

6, Fenyang Road, Shangyin opera house is located in the northeast corner of Shanghai Conservatory of music and at the junction of Huaihai middle road and Fenyang road

In recent years, many high-quality exhibitions have been planned and displayed here, which have won awards and received good social repercussions.

From the garden, go up the stairs to the second floor of the building

Many details of the building show the characteristics of Renaissance style

In 2017, the architectural restoration scheme of No

150, Fenyang Road, built in 1919, is a Renaissance style three storey mixed structure building, including a wide base composed of one floor of the basement (on the ground), and the facade is treated with three horizontal sections and three vertical sections

This repair is completely restored as it is

During the repair process, the construction team strictly compared the historical photos, repaired each minor crack level by level, and insisted on using the original technology, so as to ensure that there is no color difference between the newly repaired part and the old part

In front is a large platform, which can go down to the garden through the steps

150 Fenyang road restored as it is

From a distance, the white outer wall is looming

The building where Xuhui art museum is located, No

Its facade is horizontal imitation stone grid, the window form is rectangular, and there is a semicircular relief above the window opening on the second floor

The newly restored central axis of the garden corresponds to building 1, No

The wall has obvious joints, the window is decorated with lintels, and the whole building is white (painted in the later stage)

It is located at the intersection of Fenyang Road, Taojiang road and Yueyang Road

During the construction, many railings were blocked, and the finish was seriously polluted and flooded

There are many excellent historical buildings on the campus at No

The night scene of No

The left and right sides are hollow Aquarius stone railings

It has three floors

Small building 150, Fenyang Road, is a very famous one

In this repair, replace the existing rainwater pipe in situ, and restore the copper sheet (or white iron sheet) rainwater bucket and rainwater pipe according to the historical style

There are six Ionic columns (including two pilasters) on the second floor of the south terrace, and six Doric columns on the third floor

The first floor adopts ionic column type, and the second floor is a balcony supported by tascan column type

The semicircular balcony is equipped with rotating stairs, which is very characteristic in similar buildings

There are spiral stairs with vase railings at the balcony on the second floor outside the east wall, and triangular mountain flowers and circular ventilation windows on the top of the building

The European Renaissance style building at No

They are free and smooth milky terrazzo handrails and hollow breast boards, terrazzo steps in the same color and metal anti-skid strips

150 Fenyang road was designed as three types of protection, that is, the main facade, main structural system, main spatial pattern and valuable building components of the building shall not be changed

The cornice is a typical classical style, with the combination of virtual and real parapets, decorated with treasure bottle railings and wine bottles

It is hidden in many tall trees

The second floor on the east side of the building has a semicircular bay window, and the roof is a treasure vase railing

Left: east side (historical photo) right: east side (present appearance)   The exterior window frame of the south facade of the building is light white, which is an external wooden window

The window lintel adopts flat arch and coupon type, and is equipped with coupon core stone

It is a two-story arc gate corridor

Today, let’s go here together and feel its historical changes ↓ No

There are many exquisite details of the building, and arches and arc windows have typical Renaissance characteristics; A large area of garden landscape is reserved around the building, which is well preserved and coexists with an oval pool, forming a echoing relationship with the main building

According to the original design archives, the whitewashed stone wall of the facade of Building 1 was originally white paint, and the plinth was originally gray paint

For details, please pay attention to its relevant information

In the development of European garden house in Shanghai, it belongs to the early imitation classical garden house

Fenyang Road, Xuhui District, there are many excellent historical buildings on this small road of hundreds of meters

On April 17, the reporter learned from the press conference on the prevention and control of COVID-19 in Jinan that recently, seven cases of novel coronavirus positive infection were found

Whether it is food, culture or architecture, we can see the unique aesthetics of Xingcheng. Driving on the bridge will add a little to the bright mood   Juzizhou Bridge 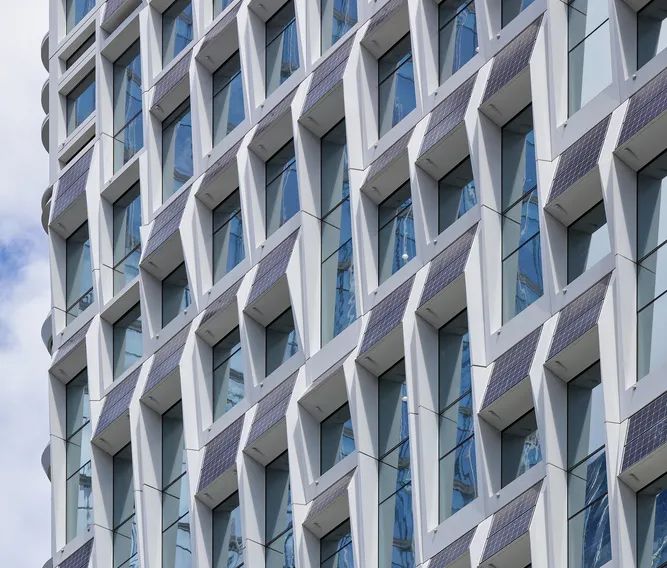 The outdoor facade dynamic sunshade concept in the design can automatically sense and intelligently and efficiently control the light and heat radiation entering the office according to different sunshine conditions,